The World’s Most Luxurious Hotels and Resorts / By Susan Camphel / Discover.Luxury / New York / 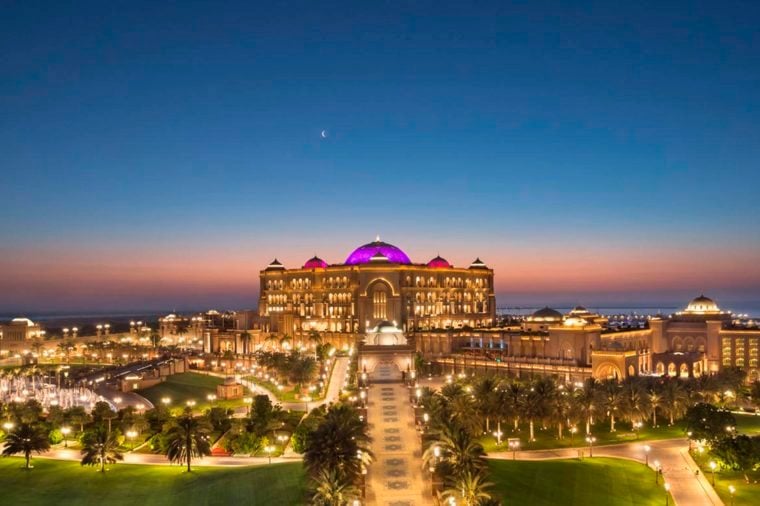 Costing approximately $3 billion to build, Emirates Palace has 394 rooms and suites, 40 meeting and conference rooms, a white sand beach, a myriad of pools and fountains, a sumptuous spa, marble imported from 13 different countries, and over 1,000 crystal chandeliers.

It’s like a small pleasure fortress that also boasts the most prestigious marina development in the Middle East.

Royalty, or those who want to feel like it, can luxuriate in one of the many palace suites, all with lavish surroundings that would befit a Sultan of old, with enough modern amenities to please today’s top tycoons.

Don’t miss these travel hot spots you might not have heard of… yet. 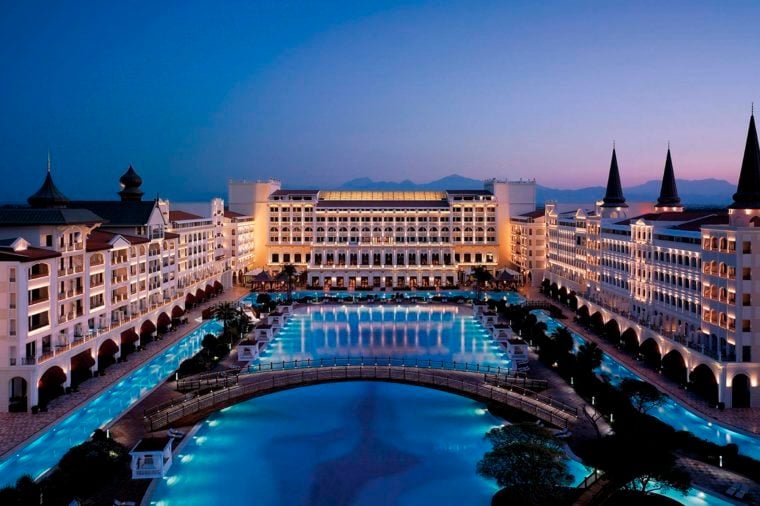 Built by Russian Billionaire Telman Ismailov in 2009 to the tune of $1.65 billion, the Mardan Palace Hotel in Antalya, Turkey, boasts the largest swimming pool in the Mediterranean (fits 1,000 guests) and is touted as one of the most elite and luxurious hotels in Europe.

Beyond the sinfully sumptuous suites and jaw-dropping interiors of gold leaf, crystal, and Italian marble, there are also ten dining spots, 17 bars, a lavish spa and a sunken aquarium full of exotic fish.

There’s more: 9,000 tons of white sand was flown in from Egypt for the beach alone, and 24/7 personal butler service is also included. Be sure to check out these hotels with incredible views as well. 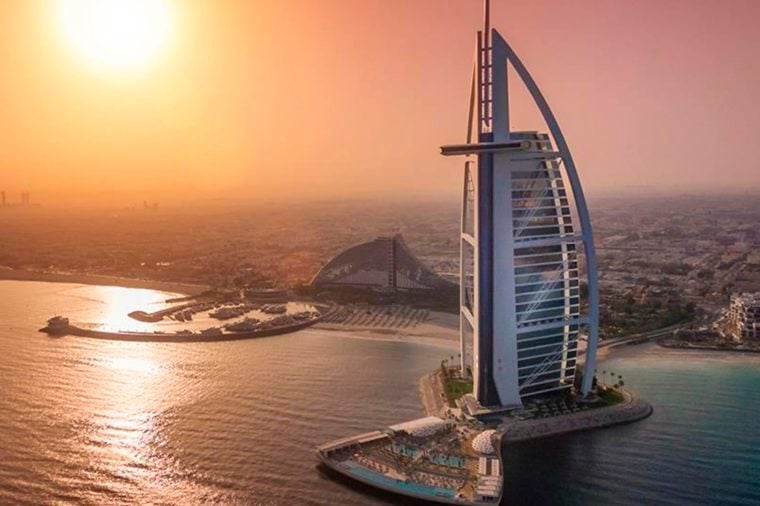 Resembling a billowing sail, the stunning architecture of Burj Al Arab Hotel in Dubai makes it one of the most photographed in the world.

All rooms are luxurious suites spanning two floors with state-of-the-art everything and incredible views.

And beyond the unique over-the-top amenities like the attached heliport and hovering tennis courts, there is a vast array of futuristic dining and nightlife options.

These are hotel booking secrets you need to know 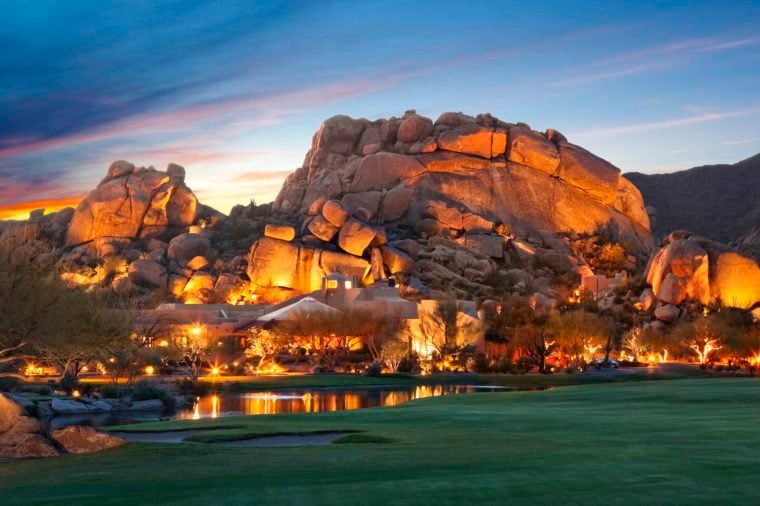 An extremely prestigious golf and spa resort,  and one of the most luxurious hotels in the world, the swanky decor is left up to Mother Nature at The Boulders, as it’s impossible to compete with stunningly surreal 12-million-year-old rock formations.

Spanning 1,300 acres of the Sonoran Desert, ultimate natural rejuvenation is promised at their massive spa compound, and their two golf courses are world class.

There’s also an über private gated Villa Retreat for celebs seeking anonymity. PR rep Deborah Bridges says, “Our clientele is among the wealthiest in the world, but we’re not allowed to talk about who our VIP guests are until they’re dead.” That says it all. 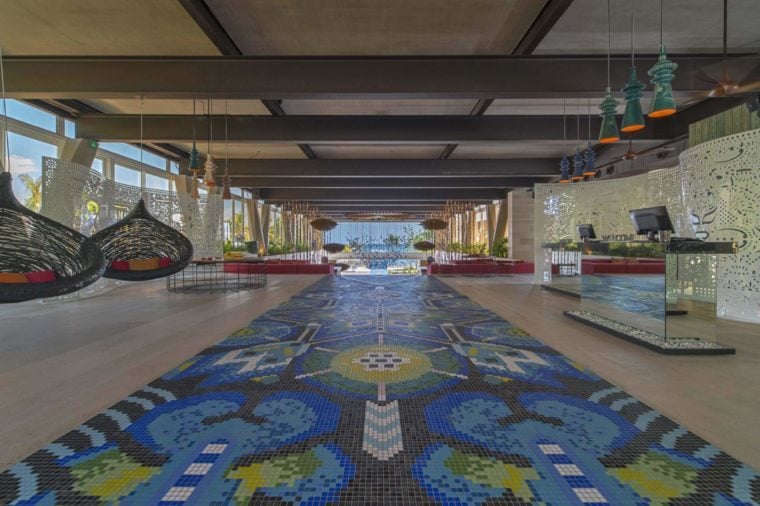 Super luxe meets fun and funky at this avant garde escape on Mexico’s Riviera Nayarit. There are offbeat accouterments at every turn, and loads of color and culture peppered throughout.

Also a surfer’s haven and a spa lover’s retreat, you never know who you might run into here trying to escape the paparazzi’s prying eyes.

Was that Iman who just strolled by? Indeed, it was! Spacious suites are divided into Ocean Escape

Villas and Jungle Escape Villas each harmoniously ensconced into the natural elements, but if you really want to impress, book the Extreme Wow Suite with two bedrooms and its own pool. Check out the most beautiful underwater hotels while you’re at it. 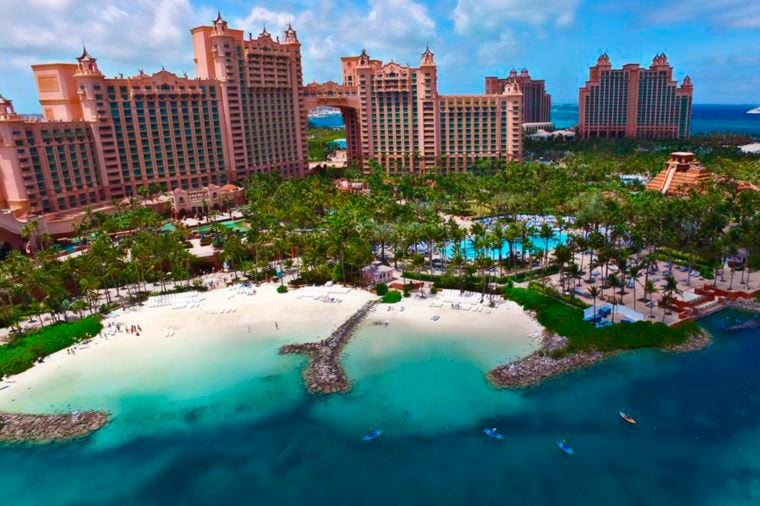 Built in tribute to the legendary lost city, Atlantis Paradise Island is a 141-acre waterscape and touted as one of the most luxurious hotels in the Bahamas.

But it’s their Royal Towers Bridge Suite on the 23rd floor that really pulls out all the swanky stops. It spans ten plush rooms topped by 12-foot ceilings and full-length windows, and includes a grand piano,

twin entertainment centers, a formal dining room with a 22-karat gold chandelier, whirlpool tubs, and more… plus a permanent staff of seven to cater to your every whim and fancy. 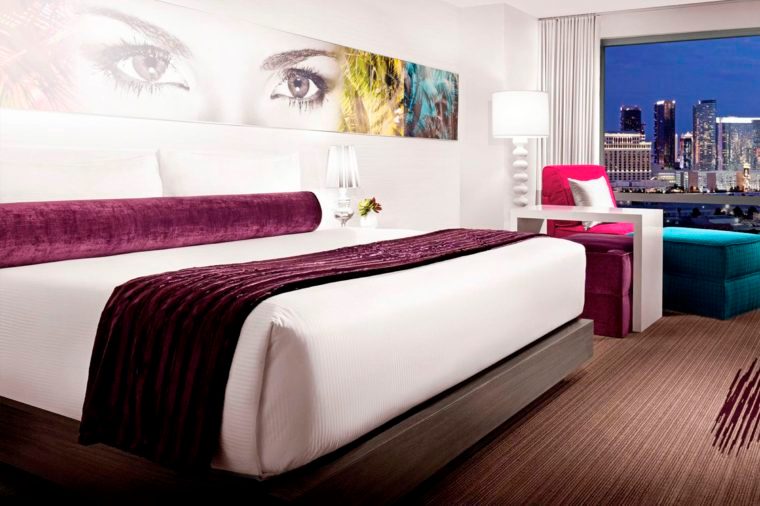 The Las Vegas Palms is famous for high roller living, and what better way to really indulge in the famous city than cavorting in one of its luxury rooftop suites, like the Hugh Hefner Sky Villa? It holds up to 250 people for a get-together and boasts a massive rooftop Jacuzzi hanging over The Strip.

A private glass elevator, rotating bed, gym, sauna, media room, full bar, and more make these swanky digs a spot to fulfill the fantasy of living in the style the world’s most famous playboy is accustomed to. (Did anyone say bachelor or bachelorette party?)

Built in 1906, The Westin Excelsior Rome has an impressive pedigree in the Via Veneto district. Though most rooms are affordable, their piece de resistance is the Villa La Cupola Suite that has recently been “refreshed” with a $7 million renovation.

it’s a perennial favorite for those who deem money to be no object.

The latest jewel in the string of opulent upscale resorts on Anguilla, this lavish escape brings barefoot luxury to a whole new level. Strategically located right in the centre of one of the absolute best strips of pristine white sand on the planet, the beachfront design blends harmoniously into the aqua sea allowing nature’s stunning scene to be the star.

Glam suites include dipping pools, and the on site spa- a reconstructed ancient Thai rice house- is out of this world.

They also have a fabulous rum bar, and you can even take mermaid (or merman) lessons replete with tail in their gorgeous glassed-in infinity pool. 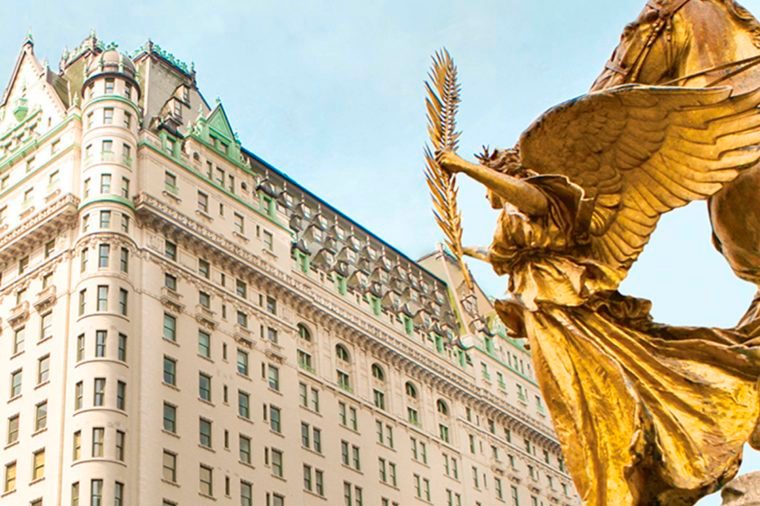 Though the Big Apple has many luxurious hotels, The Plaza is often the top choice for visiting VIPs, especially for its Royal Plaza Suite that boasts the best views of Manhattan.

The three-bedroom/three-bathroom suite is styled in the most opulent of old-world charm with a formal dining room, a library, a gymnasium, a grand piano, full kitchen (for personal chefs), and a butler’s pantry, and is serviced by its own private elevator.

Butler service is also included. Built in 1907, the iconic structure was designated as a National Historic Landmark in 1969. Don’t miss these incredible hotel amenities that will make you want to book a room ASAP.

The World’s Most Luxurious Hotels and Resorts / By Susan Camphel / Discover.Luxury / New York /

Fine Dining Las Vegas Style: Where to Eat When You Are in Town / dot.Luxury / Travel Exclusive News / By Janbolat Khanat