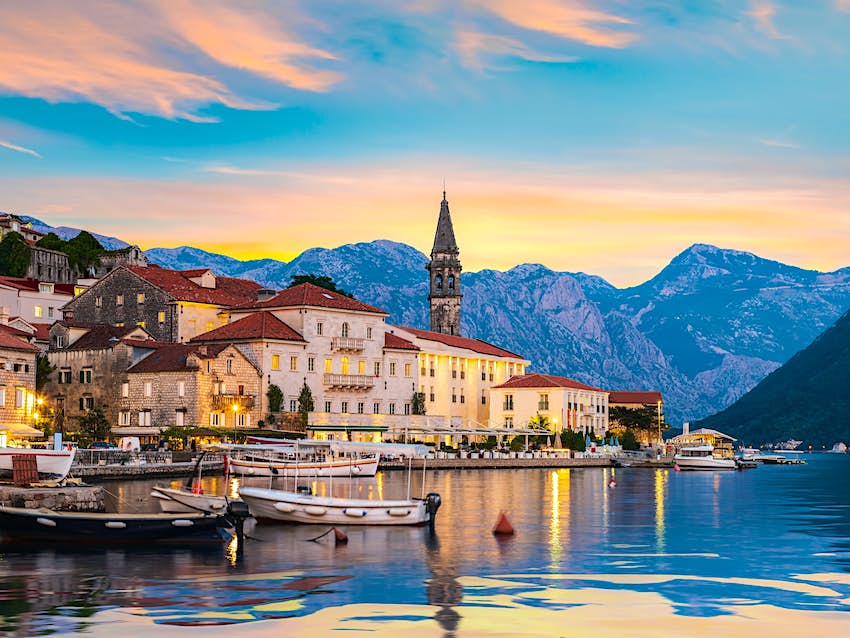 The historic city of Perast in the Bay of Kotor, Montenegro © givaga / Shutterstock

While it may be the beach that lures you to Montenegro, look up from your towel and you will discover a land full of culture, history and natural wonders, not to mention delicious food.

These are the things Montenegrin memories are made of.

There is no more spectacular introduction to Montenegro than the drive around the breathtakingly beautiful Bay of Kotor. Its fjord-like proportions get more dramatic the further you journey into the inner parts of the bay on a road wedged between brooding mountains and inky waters.

Mountains remain a constant backdrop along the busy Adriatic Coast highway, as well, although your eyes will be constantly drawn to the sparkling waters below.

Most memorable of all is the white-knuckle drive along the old serpentine road linking Kotor to Lovcen National Park. As you loop up and up through 25 hairpin turns, the view continually expands until it eventually takes in the entire Bay of Kotor and the Adriatic beyond.

Quite frankly, there is barely a route in Montenegro that isn’t gorgeous. Even the main highway heading north from Podgorica to Serbia is a scenic tour-de-force, traversing the exquisite Moraca Canyon. Likewise, the road heading north from Niksic along the Piva Canyon is remarkable, clinging to cliffs as it passes between 56 small tunnels blasted through the mountainside.

Montenegro’s capital Podgorica and student-filled Niksic have a low-key charm and some buzzy bars, but don’t come expecting big-city thrills. Far more interesting are the palaces and museums of the old royal capital, Cetinje, and the ancient walled towns of the coast.

One of these, Herceg Novi, is a sun-soaked holiday town which spreads along the slopes between the coastal highway and a gorgeous pedestrian promenade that winds along the shoreline.

Kotor tops the list of historic streetscapes and the magnificence of its setting. Wedged between the mountains and the bay, its ancient core is encircled by mighty stone walls which extend in a broad loop across the mountainside to a height of 853 feet. Within its fortifications is a warren of marbled lanes liberally peppered with churches.

Little lost-in-time villages are a hallmark of the Montenegro hinterland. There are some particularly charming ones to explore in the countryside around Lake Skadar, where families still make wine as they have done for centuries.

Pretty little Rijeka Crnojevica, on the banks of the river of the same name, has a cluster of historic structures including the modest house of Petar I Petrovic (aka St Peter of Cetinje) and a stone bridge commissioned by Prince Danilo. Also worth a visit is the nearby village of Dodosi, where you can swim from a floating bar or leap off a bridge into the river.

Is a village really a village when its composed almost entirely of grand Venetian palaces and churches? With a population of less than 300 people Perast can hardly be called a town.

Located seven miles along the bay from Kotor, Perast hums with tourists in summer who flock here to dine at its excellent water’s-edge restaurants and to visit the fascinating church on Our-Lady-of-the-Rock Island.

Perhaps the village most synonymous with Montenegro’s heartland is Njegusi, the ancestral home of its former Petrovic rulers. It is famed for its cheese and honey, but especially its prsut (prosciutto), which is prized throughout former Yugoslavia.

If you see a dish with the adjective Njeguski on a menu (whether it be schnitzel, steak or pork chops) expect it to be stuffed with top-quality prosciutto and cheese, and calculated to tug at Montenegrin heartstrings.

On the coast the cuisine is indistinguishable from that of neighboring Dalmatia: lots of delicious fresh seafood liberally doused in olive oil, lemon, flatleaf parsley and garlic. The Venetian influence lingers in the form of excellent pasta, risotto and gnocchi. Around Lake Skadar, squid and octopus is swapped for freshwater fish such as eel, carp and bleak.

Head into the mountains and you will encounter stomach-expanding comfort food designed to get you through the long winter nights. A particular treat is meat slow-cooked ispod saca, roasted on a hearth under a dome-shaped metal lid covered with charcoal.

Waves of empire have crashed over this land since time immemorial. The Romans took over from the native Illyrians in the 2nd century BC, and the legacy of their long rule can still be seen today – most notably in the form of a wonderfully well-preserved set of floor mosaics uncovered in Risan on the Bay of Kotor. There are further mosaics in an unassuming site at the beach resort of Petrovac na Moru.

Montenegro’s buzziest beach town, Budva, was once a Greek colony and is one of the oldest cities on the Adriatic. Budva Museum houses many archaeological treasures from the Classical period, some of which were unearthed from the Roman-era necropolis which can still be seen just outside the old town walls.

Immersing yourself in nature

Between the mountains, lakes and rivers of the hinterland, there are plenty of memorable places to stay and be surrounded by nature.

One of our favorites is a lovely family-run campsite near Dobrilovina, above the banks of the Tara River, where you can pitch a tent, pull up a motorhome or rent a sweet little wooden cabin.

Glamping is a relatively new concept in Montenegro, but a couple of sites have sprung up in recent years offering pre-pitched tents with comfortable beds.

Also worth considering are the etno or eko villages, small complexes of wooden huts reminiscent of traditional katuns (shepherds’ dwellings), that are scattered around the mountainous regions at the north of the country.

Montenegro offers plenty of opportunities to escape into nature, with well-marked hiking and biking tracks all over the country.

However, if we were to single out just one unforgettable nature-based activity in this action-packed country it would be to take a rafting trip through the magnificent Tara Canyon in Durmitor National Park. The scenery is truly astounding.

RECENT POSTS TODAY IN THE WORLD

TODAY AND ONLINE STATS / TURKEY & IN THE WORLD

Copyright © All rights reserved ( 2012 - 2021 ) All rights reserved by wmwnewsturkey company inc.No news and photos without permission.This site has been installed by TONY BAR and is based in New York.All rights belong to SEDAT KARAGOZ / sedatkaragoz@wmwnewsturkey.com / Design and editing Tony Bar & Sedat Karagoz / ISTANBUL / NEW YORK / ALMATY / DOHA - We use cookies to ensure that we give you the best experience on our website. If you continue to use this site we will assume that you are happy with it. Web sitemizde size en iyi deneyimi sunmak için çerezleri kullanıyoruz. Bu siteyi kullanmaya devam ederseniz, bundan memnun olduğunuzu varsayacağız.
WEEKLY  TRAVEL  & LIFESTYLE MAGAZINE ...Everything should be as in your dreams / TRAVEL EXCLUSIVE WMWNEWSTURKEY'S / MOST BEAUTIFUL AND LUXURIES HOTELS ,RESTAURANTS,BARS,IN THE WORLD...