Graz, in the Austrian state of Styria, is an offbeat destination tailor-made for the cultural and adventurous traveler. In some ways, it’s just what you would expect from Austria’s second-biggest city: grand, modern, and brimming with life.

But dig a little deeper and you will discover Graz is so much more than meets the eye. 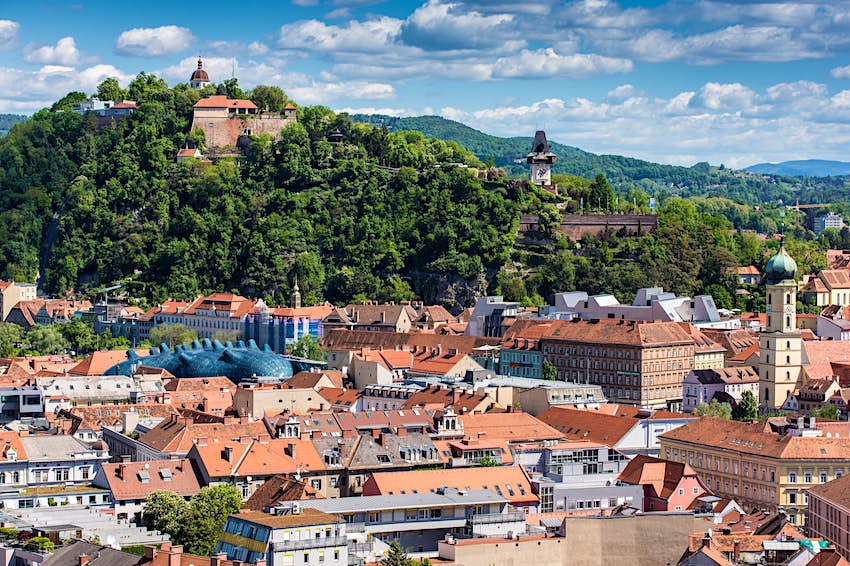 With its distinct Mediterranean flair, emerging design scene, and bustling nightlife, Graz will keep you on your toes day and night.

One of Graz’s lures is its eccentric mix of architectural styles. From classicism to art nouveau, from medieval to contemporary, a good wander reveals the true wonders of the city.

As you stroll through the inner city, feast your eyes on the exquisite Baroque facades that line the streets. In the heart of the city, the main square and the adjoining Herrengasse are prime examples of Styria’s Baroque architecture. Another is Eggenberg Palace in the city’s outer districts, at the foot of Plabutsch mountain.

Together, the Historic Old Town of Graz and Eggenberg Palace are listed as a UNESCO World Heritage Site.

Like clearings in a dense forest, there are also pockets of calm away from the hustle and bustle of the main streets. Dare to venture down narrow alleys, and you will be rewarded with some of the most beautiful Renaissance courtyards in Europe.

Marvel at the intricate arcades with their perfectly symmetrical arches and carefully sculpted balusters. Although there are many such courtyards in Graz, Landhaushof is probably the best example.

Soaring above Graz and visible from many corners of the city is the Clock Tower (‘Uhrturm’). The Uhrturm has been the symbol of the city for more than seven centuries and is deeply rooted in the minds of the city’s inhabitants. So much so, Graz paid a significant ransom to keep it from being destroyed during a Napoleonic invasion in 1809.

Graz is a city of contrasts and nowhere is this more apparent than in its skyline. Here, modern design seamlessly blends in with classic architecture. To fully appreciate the city’s beauty, scale Schlossberg ‘mountain’ in the heart of the city and take in the stunning vista from above. In the calm sea of red that is the city’s rooftops, you’ll spot pops of bright color.

As a UNESCO City of Design, Graz even knows a thing or two about contemporary architecture. Say hello to the ‘Friendly Alien’ – a giant blue blob serving as the city’s Modern Art Museum (‘Kunsthaus’) or stare into the cool blue of the Mur River from Murinsel, a floating island connecting the city’s western and eastern districts.

With the city’s skyline being redefined by cutting-edge examples of modern architecture such as the Science Tower adjacent to the newly built Smart City neighborhood, or the Prisma Engineering company building in Liebenau, Graz also rewards the more adventurous traveler willing to venture out to the outer districts.

Taking inspiration from Vienna, Graz is a true haven for coffee lovers. Let your nose guide you to the closest cafe and plan for your day ahead as the warm aroma of coffee fills the air.

Bars and restaurants offer a welcome reprieve from the cobblestone streets at almost every corner. Choose from one of many al fresco dining options and let the world pass by as you sip on a bittersweet Aperol Spritz. Close your eyes and listen to the sounds of the city:  At this moment you will truly understand the city’s Mediterranean flair.

When the long summer days fade into the night, Graz reveals another side of itself. Attend a late-night vernissage (private art exhibit), relax to some smooth jazz at Stockwerk Jazz, or join the thousands of local students living it up in the city’s nightclubs.

In the late days of the summer, you might attend one of the many festivals in Graz. Choose from Styriarte for classical music, La Strada for street art, music, and dance, and several others.

Graz is Austria’s ‘Capital of Delights’ and manages to surprise even the most refined palates. The day starts early for foodies in Graz as hundreds of vendors open their stalls at farmers’ markets around the city. From their vans, they carry crates of organic produce picked only hours earlier.

At more than 10 locations, you can browse for juicy Styrian apples, crisp lettuce (‘Grazer Krauthäuptel’), cheeky scarlet runner beans, rare truffles, cured ham from the Volcano Country in southeastern Styria, and of course Styria’s ‘black gold’ ­– pumpkin seed oil. Be sure to come early, as many stalls sell out before 10am. Popular markets are located on Kaiser-Josef-Platz and Lendplatz.

Those who like to sleep in don’t need to despair, as plenty of high-quality produce makes it to the city’s many esteemed restaurants. Here, chefs serve concoctions of traditional flavors with a modern twist that are sure to astonish you. Those seeking traditional Styrian food should scan local menus for Styrian fried chicken (‘Backhendl’).

Styrian food is best accompanied by light, dry Styrian wine, grown in the hills just south of Graz. Thanks to its unique landscape, the region provides the ideal growing conditions for a large variety of grapes. The most popular are all white, ranging from Welschriesling to Sauvignon Blanc, Pinot Blanc, and beyond.

Although Styrians love white wines, red grapes are also grown – one of the region’s most recognizable specialties, Schilcher, is produced from the red Blauer Wildbacher grape. Schilcher is a rosé that can also be produced as sparkling wine and is best paired with cured meats.

As if the city’s dedication to farm-to-table cuisine wasn’t enough, Graz hosts a number of projects related to sustainable development that any responsible traveler will appreciate. Visitors can explore the city easily on foot or make use of the extensive tram network. In the inner city, visitors and locals alike can ride the tram for free (‘Altstadtbim’). Graz is also Austria’s most bicycle-friendly city with bike paths stretching to the furthest corners of the town.

Mindful shoppers will enjoy discovering hundreds of locally owned businesses, many of which contribute actively to social change. From upcycling to providing employment to marginalized communities, the business landscape in Graz is innovative, inclusive, and sustainable.

Thanks to the city’s mindful approach to tourism, Graz will be just as enjoyable to visit in 30 years as it is today, allowing you to peel back another layer with each time.