CEO of Azumi restaurants Sven Koch on the future of hospitality

A sushi platter from Zuma’s menu

When chef Rainer Becker opened the first Zuma restaurant in Knightsbridge in 2002, it set a new benchmark for informal high end dining.

Sven Koch joined the restaurant group Azumi Ltd Worldwide in 2011 and now, their portfolio includes ROKA, ETARU, Oblix at The Shard and INKO NITO, with locations spread across the globe. LUX: You opened Zuma in Boston last year. How is that going?
Sven Koch: Zuma Boston has done very well; I am pleased to say it was an instant success. We have a beautiful bar area at the front of the restaurant which quickly turned into “the place to be” within the city.

Obviously, Covid-19 has affected things hugely and the restaurant has been closed for a significant amount of time, but we are positive about building the business back up once we reopen.

LUX: You have a number of different brands in the portfolio. Do they all have different customer bases, or is the idea that clients can flip between them?

Sven Koch: It’s a mix really. We have some crossover between the brands, in fact individual locations more so, like Zuma and ROKA Mayfair, due to the proximity a lot of guests dine at both. Other than that, I would largely say they have their own customer bases.

The ROKA locations have more a neighbourhood vibe, a lot of people frequent specific locations because it’s close to where they live or work, although obviously there are destination diners.

Both INKO NITO locations, in London and LA, are young, vibrant area’s and very much represents the type of clients that the brand is aimed at. Oblix at The Shard, has a vastly different clientele as its our only non-Japanese restaurant and due to the restaurants location. LUX: Which is the more powerful brand, between Zuma and Roka, and why?

Sven Koch: It’s hard to say if one is more powerful than the other, they are both strong in their own right but obviously different.

Zuma has more international recognition due to its global footprint and the nature of the clientele who travel a great deal and regularly will eat in our locations in other countries.

ROKA is predominantly based in London, with four locations, and has a huge following locally but this is also growing.

We recently opened ROKA Dubai which has been very successful, and we have plans for other international locations. Ask me again in a year or two and I may be able to give you a more concrete answer!

LUX: It is famously hard to create a group of restaurants operating around the world. Why have you succeeded where others have failed?

Sven Koch: Honestly, it’s down to the people – our teams! We have always operated on the philosophy that it’s important to nurture and grow good people within the business.

We have a lot of staff that have worked in multiple locations around the world for us and we really support these internal transfers as it helps to spread the company’s DNA, they are effectively like ambassadors.

Additionally, we try to empower the teams in individual restaurants, they are on the ground and understand customers the best.

LUX: You are one of the first pioneers of informal high end dining. Is the scene moving on? If so, to what?

Sven Koch: I don’t think so, you only have to look at the influx of international restaurant brands opening in London to realise that the trend is not going anywhere.

That is not to say that the industry is not diversifying because I believe it is. The lifestyle element is key, people don’t simply want to go out for a meal anymore, they want to be able to spend an evening in that location; enjoy drinks before and/or after dinner, music, atmosphere…

We are fortunate that all of those elements have always been part of our concept and that Japanese food is timeless as many other cuisines go in and out of fashion.

LUX: How will the coronavirus crisis affect dining out in general and your group in particular?

Sven Koch: Sadly, it seems to have affected everyone, although the hospitality industry has been particularly badly hit. We had to close all of our locations internationally, bar one (Hong Kong), at the peak of the crisis.

Slowly we have been able to reopen the majority, but some cities or areas are still suffering from the aftermath so we have made the choice to wait.

I think we’ve been very fortunate on the whole with government support in the countries we have restaurants in, additionally our landlords have been very understanding during this difficult time.

LUX: For years, we have seen an expansion of global travelling young wealthy people – are these your base? Is that now changing, with political and global uncertainties?

ven Koch: Yes, they definitely are the Zuma customer base. Obviously Covid-19 has had huge effects on travel both nationally and internationally and I think it is too early to determine the long-term effects at this stage.

Having said that I just returned from the South of France for work and it was packed. It almost felt like Covid had never happened, international travellers everywhere…

Prior to this trip I would have said it will take some time for travel to recover but now, you tell me?! Oblix at the Shard is the group’s only non-Japanese restaurant, offering a rotisserie and grill menu

LUX: Is food miles an issue? Will it be?

Sven Koch: Food miles is certainly something that we need to be conscious of. It is a tricky one for our restaurants as so many of the speciality products we use can only be sourced from Japan.

You obviously try and buy as locally as we can but in some cases its just not possible.

In recent years we have experimented with making our own products, like soy sauce for example which was fantastic. I think that this and the resurgence of smaller artisanal producers are the way forward…If anyone knows people producing miso in the UK then let us know?!

LUX: Is the food offering at Zuma and ROKA evergreen, or does it involve constantly? Would a diner from 12 years ago recognise the menu now?

Sven Koch: I would say 70% of the menu is evergreen but honestly that’s dictated by our customers who sometimes uproar if we take dishes off.

We have several new seasonal dishes that are added to the menu and change quarterly which are developed by the individual restaurant teams.

If one of those dishes happens to sell exceptionally well then, we add it to the menu permanently. In answer to your questions, yes, they would recognise it 12 years on.

LUX: You have a lot more competition now. How has that affected things? Do you get irritated by imitators?

Sven Koch: Competition is good, it keeps you on your toes and pushes you to keep evolving. When new restaurants open in competition with us we generally feel it for the first month or so.

Customers love to try the latest new thing and we do see a small downturn in business which is always a little difficult to deal with, but they soon return to us, which is a testament to the quality of our product and our team.

Ha! Do we get irritated by imitators?… Good question! I must be honest; it is irritating when you see another restaurant directly ripping us off, it happens regularly that I go to another restaurant, open the menu and its surprisingly so familiar!

I always just think: why don’t you make it your own? Be a bit creative, work a little harder – fundamentally I think it’s a very lazy approach. 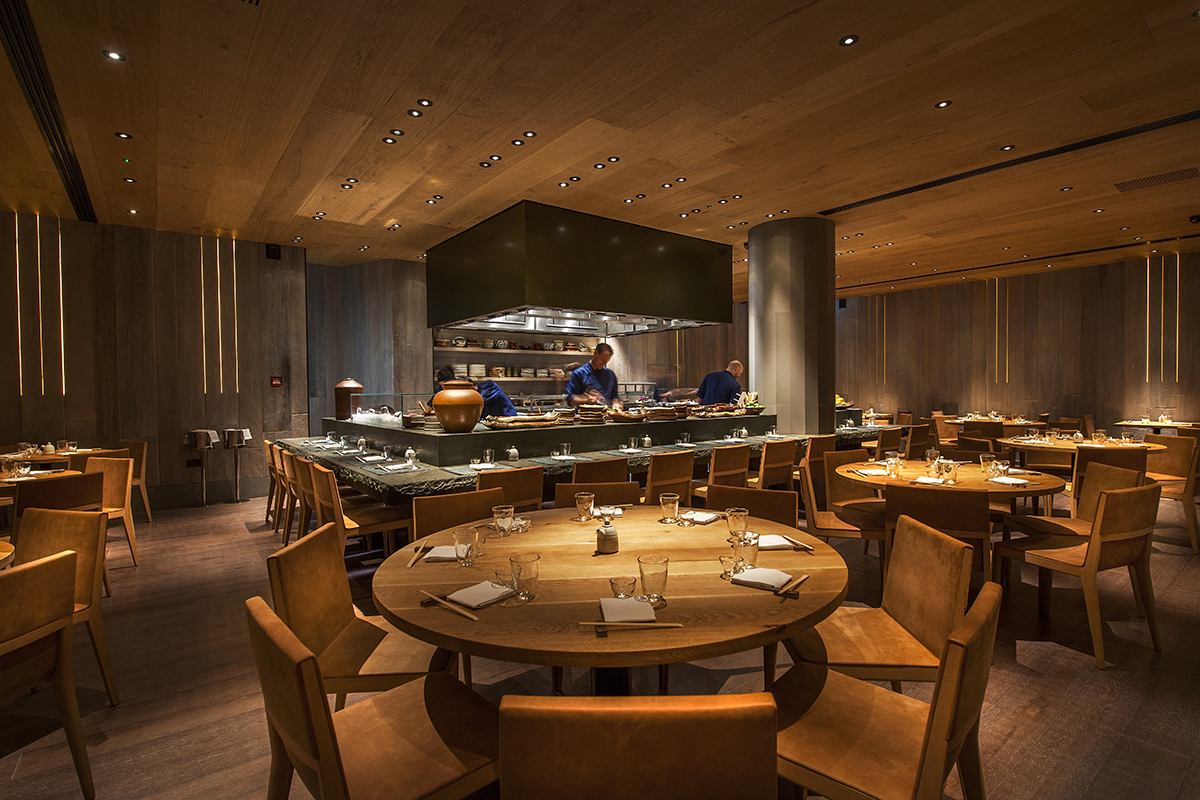 LUX: Are we facing a speed bump or a new paradigm?

Sven Koch: 2020 has been a difficult year to say the least and things have certainly shifted but I would love to think this a speed bump and we are approaching as such. We are pushing ahead with plans, albeit a bit more cautiously from a budget perspective.

Between Zuma, ROKA and Oblix, we aim to open in excess of 15 new locations in the next 3  years.

LUX: What cities or countries would you like to be in, which you are not in currently?

Sven Koch: As I mentioned we have substantial expansion plans in the not too distant future and are looking at sites in Europe such as Paris, Cannes, Saint Tropez, Monaco, Madrid and Capri, and further afield in Cabo, Mexico, and Morocco…

I don’t think that leaves much left! From a personal perspective, I would love to open something in Germany – as would Rainer [Becker] – given that it’s our home country but so far, the right opportunity hasn’t presented itself. Watch this space!

LUX: How do you and Rainer Becker share duties?

Sven Koch: We don’t really share duties to be honest, we have never sat down formally and assigned roles as it has always been a lot more natural and organic than that.

Obviously, Rainer created the restaurant concepts and he is still heavily involved in the creative side of things including the food and design.

I tend to take care of the day to day running of the company including the expansion and growth. We are very collaborative however and always tend to bounce ideas off each other.

LUX: What has been your greatest challenge, and how did you overcome it?

Sven Koch: For sure Covid-19 has been the biggest challenge both personally and professionally.

The pandemic has hit everyone hard and its devastating to see people’s families effected and being so hard hit financially.

As a business we are working hard to ensure we can bring as many members of staff back into the business as possible. It really is a frightening time.

There are many reasons to visit the largest city in Turkey. Istanbul is undoubtedly a city full of history and tradition. The majority of these traditions are still relevant today, and you can discover all of their subtleties when walking through Old Town. The cultural influences of the many empires that ruled Istanbul are still omnipresent throughout […]

These days, hotels need to do much more than provide comfortable accommodation and good service to capture the hearts of travelers; they also need to be ABSOLUTELY picture-perfect. Why? Just so that visitors can elicit feelings of jealousy in the minds of their social media following. In fact, I came across a statistic that said more […]

Add WMWNEWSTURKEY to your Homescreen!