We're here to help you discover the traveler within.This passion-packed list of 2023's must-see destinations, places, and immeasurable experiences is backed by our experts in travel. www.wmwnewsturkey.com & www.wmwnewsworld.com

Toronto’s Ace Hotel Wants To Turn The City’s Creative Scene Up To 11 The New Downtown Development Is Bringing In Artists, Musicians, And Promoters To Create Some Noise In Its Historic Neighborhood / By Sallie Lewis /dwell.com / Janbolat Khanat Almaty Tourism Culture & Art News Office

“Toronto is a city of great innovators and creatives—its richness of film, music, technology and arts is evidence of this,” affirms Brad Wilson, CEO of the hotel group and Atelier Ace, its in-house creative agency. 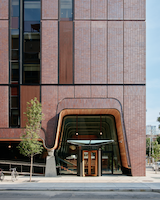 Today, the area where the Ace stands is burgeoning, with its mixture of office spaces, loft and condo developments, restaurants, and nightlife culture that attracts creative professionals and innovators in tech. But it’s been a cultural hub for years. In 1995, Alanis Morissette released Jagged Little Pill, a seminal album for alternative rock, just a few blocks away from the new hotel at a local music club. Only in the last 15 years or so did the neighborhood begin to look the way it does now.

The Fashion District, also known as the Garment District, was the epicenter of the city’s textile and clothing manufacturing from the early 1900s onward. Factories here sheltered a “rag trade” that boomed thanks to the city’s port and network of rail lines. After World War II, manufacturing operations migrated away from the city’s center, leaving warehouses and factories vacant.

The neighborhood was in decline up until the ’80s, which brought about a wave of change. Architects, advertisers, and graphic designers began setting up offices in now-historic buildings that make up the downtown area, many of which have been preserved by the City’s Office for Urbanism. A zoning change in 1996 spurred additional development: Empty warehouses became lofts, and old buildings were updated to attract new businesses. A mixture of new commercial and residential developments continue to flesh out the historic zone. 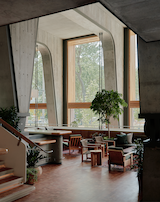 The Lobby, one of the hotel’s restaurants, is furnished with vintage furnishings and pieces by Atelier Ace, the hotel group’s in-house creative agency. The tall windows overlook St. Andrew’s Playground Park.

Today, the neighborhood is thriving, and the Ace Hotel wants to add to the pulse. Similar to how Ace’s other properties are attuned to their settings—like its “swim club” in Palm Springs—the Toronto hotel is making an effort to connect with its neighborhood’s creative scene.

“The hotel’s rotating art program will invite both emerging and established artists to play and showcase their work,” says Michael Nyarkoh, a freelancer creative producer and cultural programmer who collaborated on the project. “We wanted to create moments of discovery and to share ideas among a diverse group of people.

” Weekly events hosted in the Lobby, one of the on-site restaurants, will feature Yohomo, a local platform for queer artists, as well as DJ sets and live performances curated by the city’s beloved indie music label, Arts & Crafts.

The label was also tapped to curate a collection of more than 300 vinyl found in guests’ hotel rooms.”We were honored to have the opportunity to represent this diverse music history of our city through the curation of Ace’s in-room vinyl collection,” says Cameron Reed, the imprint’s director of marketing and label. 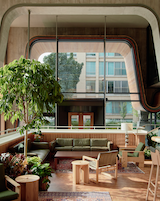 The hotel’s entrance and lounge space in the Lobby has a grand feel with high ceilings and the swooping forms.

Just as the hotel’s arts program seeks to connect to the city’s creative culture, the building itself is designed to synch with the history of the neighborhood.

But Shim and Sutcliffe also wanted to channel the city’s spirit of reinvention, and the interiors reflect their forward-looking approach. The lobby is grand and futuristic, with massive poured-in-place concrete arches and soaring ceilings paired with Douglas fir and oak elements.

“This rich and robust layering of natural materials are meant to lead visitors and guests to wonder at the age of the building—if it’s old or new,” says Brigitte Shim. “In so doing, the architecture nods to earlier Ace Hotel properties—in Seattle, Portland, and New York, for example—that repurposed historic buildings.”

The bar in the Lobby, one of the hotel’s restaurants, is suspended by steel rods and clad in red oak, evoking the design of a floating cocktail tray. Chef Patrick Kriss oversees Alder, a restaurant on the ground floor featuring seasonal, wood-fired fare.

Kriss also oversees the hotel’s other dining programs, including the Lobby and a rooftop bar and lounge, Evangeline, set to open later this year.

In collaboration with Atelier Ace, the hotel group’s in-house agency, Shim and Sutcliffe designed the public and private interiors for the fourteen-floor plan, again referencing the neighborhood’s manufacturing and textile heritage as well as the wild landscape of Ontario, with its sprawling woodlands.

From street to sky, the interior spaces reflect their terrestrial locations: The ground floor is finished with wood, and has a low-lit and earthy feel; above, the second-floor meeting rooms are airier, more voluminous, and light-filled.

The guest suites feel like urban cabins with a nod to nature, thanks to Douglas fir paneling and deep-set window benches, which connect guests with the neighborhood around the hotel.

In Ace style, the rooms have a lifestyle bent, featuring original accents like custom quilts by Canadian artist Kyle Parent.

There are guitars for the musically adept, and for the inept, turntables to play the vinyl collection provided by Arts & Crafts. Either way, for the label’s Cameron Reed, the Ace is all good:

“Anyone committed to amplifying the culture of Toronto and bringing people together is a positive addition to any neighborhood, and that’s exactly what Ace is doing.”

9/11 anniversary: How this remnant of the World Trade Center became a symbol of NYC's resilience / By Christina Stanton /www.lonelyplanet.com / Janbolat Khanat /...